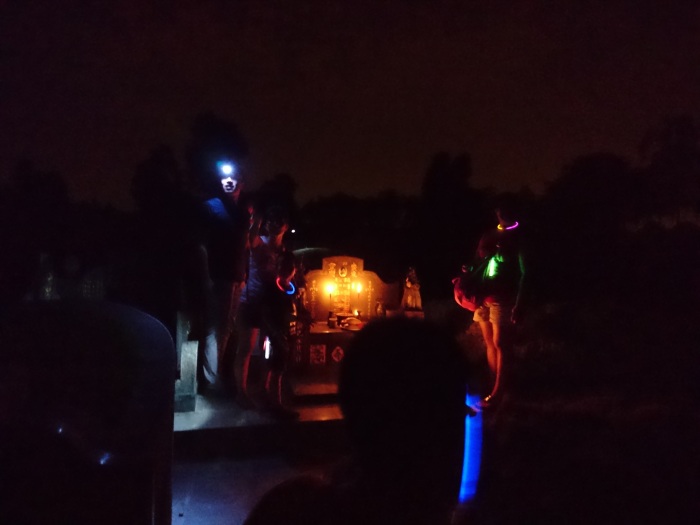 This years 清明節-Qingming Festival is rather unique because your uncle U-Wei wants to do a night one, so that we can beat the crowds we encountered last year. (you can read more here http://wp.me/p3qQYz-8C).

We toyed with the idea of 3am, your mum said no, 2am, your mum said ‘no’. Finally we decided on 12 midnight, and from your grandparents’ place, we set off in your uncle’s MPV, 6 adults and 2 kiddos! To our night adventure!

We have a few hypothesis in the car, we were thinking will there be people? Will it be deserted? There were stories exchanged in the car that there are some friends we know who does that, there are people who does that all these years, all these times.

So what we are doing is not actually new, but doing it for the first time is still pretty darn exciting for us!

When we reached, lo and behold! There are people! Well, not many, but enough to make a crowd.

The road was a little difficult to navigate in the dark, but your uncle U-Wei did well, and brought us to the spot. He parked and we are there!

With flash lights out, light sticks out, we made out way to your great-grandma’s spot and did our prayers. There was a bit of a confusion over the huat kueh, as we were wondering where did ours went, since we threw away the one there was there since morning.Your grand dad’s siblings came earlier to offer their prayers.

Anyway while that was being sorted out, your uncle has to go and take a dump, nature’s call at the most ungodly hour!. We were trying to figure out where the portaloo was, our lights couldn’t pick up the usual silhouette of a mobile toilet, so he has to go off to look for one, I went with him and, eventually the whole tribe went, since Wayne wanted to pee as well, leaving your grandma, grandpa and Ah Kim at the tombstone.

So we got back after all the business is done, and began to absorb the night scene, it was about past 1am, and there are still people streaming in. There were bonfires from burning of hell notes and other paper stuffs for the dead. The scene was hardly eerie, in fact it was a welcoming relief from the mid day heat, traffic jam, and crowd. It felt so good that we wanted to do this as a SOP.

I think the idea is good, we have very bright torches, and there was a bit of moonlight. I’m a person quite accustomed to the dark and would actually preferred the light to be off.

Once we have offered our prayers, we decided to head off, careful to watch where we are stepping and without much of a hiccup, we got back to the car.

Mandai was our next stop, and like Lim Chu Kang, the crowd was sparse. We found a parking lot with no problem. Had we come during the day, finding a parking lot IS a problem.

Anyway we made our way up to the third floor where your great grand pa’s niches is located. This time we came prepared with masks to deal with the smoke and fumes. It wasn’t so bad this time around as there were less people, so less burning. There was ample space, for us to lay our offerings to our ancestors. There was no squeezing, people moving around people, jostling here and there. We can take our time, and it was actually quite a nice change

It was just us!

But by the time we reach there, we are already quite tired, but we still made our way to Jalan Kayu to have a bit of prata supper before heading back, by the time we hit the sack it was 4.27am, and we slept for almost the whole of Sunday, only waking up about 2pm.

What a night adventure it has been!

(P.S. the huat kueh, we thought was there since the morning, was actually brought there by us. The morning folks didn’t bring any huat kueh. We placed it there, and the next moment we threw it away!)

theaikidad Aikido, Parenting and everything in between.
Published April 10, 2016April 8, 2016