You have finally move on and upwards, from Primary School to Secondary.

In our life here in Singapore, it is a big deal, the private education industry is a large one and it ‘preys’ mostly on the parents’ insecurities and aspirations for their children to get good grades. Of course, hopefully that leads to a better future, riches and wealth. It is all done in the best intention, albeit the intense stress and pressure.

You did well for your PSLE. “Well” as a matter of context, as you are not one of the 25 students who scored above the magic ‘250’. In fact you’re not even close, but you set a target and you achieved that. Which is more important than being one of the smartest lots in your school.

In fact, you did even better than your dad, who failed his maths, score “A” for English and Science, and a “C” I think, for my Chinese. You have a better score, I went to a normal stream and you are going to the express.

Personally I am not a big believer in the PSLE score, My bottom line is either you pass or fail, you pass, how well? Well enough for express stream, okay, fine. Good for the normal stream? That’s fine as well. Life goes on, the sun will still rise and set.

But of course, that’s just your dad ranting, it is a big deal. Children went home crying, because they were 5 points shy from their target. There were some who thought they could get like 240, but end up with an odd-210. There are those who did well in prelims, only to falter in the actual exams. Well, there are some outlier even, they failed, and have to retake. 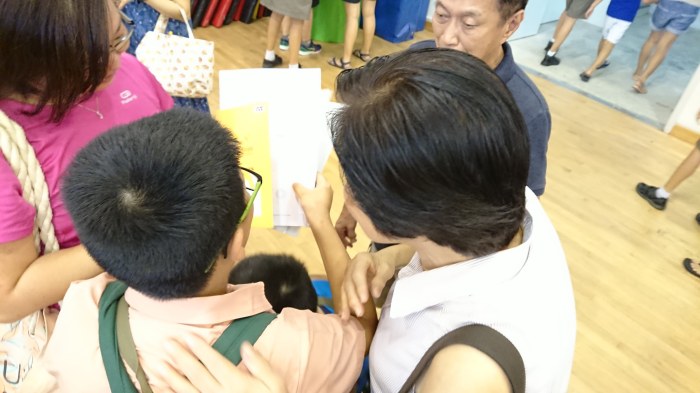 All the credit goes to your mother

Really, she did all the work, your dad really didn’t cared much about your academic grades. She was thrilled that you made your mark, and achieved what you said you set out to achieve.

She helped you, drives you, work with you, bear all the pain and angst of your studies. When you did badly, she was affected the most, and when you did well, she’s the happiest. She worked the hardest and rightfully deserves to shed those tears of joy today.

So right now, after this first big hurdle in your life, your life will have to go on. You can reward, and cheer and after all the jubilation, you will have to hunker down and work hard, once again, as Secondary School education is another new environment that puts you to the challenge.

You friends in Horizon Primary, will become your old friends. You will make new friends in your new environment, and your might be pleasantly surprised that some of your Horizon friends might end up in the same Secondary School as you, and that friendship will continue; or it might not.

Some of your old ‘nemesis’ in Horizon, will no longer be relevant, once everyone moves to their respective secondary School. Those quarrels and grudges in your primary school, will cease in relevance. Suddenly with so much to look forward to in your new environment, you’ll lose track of what happened in the Primary school. You’ll have so much new things to do, learn and friends to make, there is no time to relish on nostalgic past. Stay present and look into the future.

Your future will be a heck a lot different from mine, and it will be a very asymmetrically challenging future, no one will be sure about anything in. So now that your Primary School education has come to an end, charge ahead and learn new things in your Secondary School.

Your dad is excited about your prospective new environment, and it heartens me to see you gain independence in character and confidence in personality.

Martial arts is not for kiddos, I am not a big believer in teaching kids martial arts.

Being in Aikido for such a long time, I do get friends with kids asking me if this and his art is suitable for his/her children. If Aikido is recommended. To which I only ask one question.

“Does your daughter/son wants it?”

Martial arts is a learning journey, and there is very little reward getting into one. It is not like you will get a certificate at the end of it and ‘graduate’. Martial arts is a serious journey that needs a lot of commitment and time. If you are not sure your children is able to walk this journey that will last their life time, don’t commit wasted time. Martial arts for kids is not a very rewarding journey, there is no definite outcome. Even as an adult, it is difficult for me sometimes to understand this journey I am in, since there is little outcome to say that you have ‘learned’ something in martial arts, which is sufficient to satisfy an outcome driven style of parenting. In short, you give a lot to martial arts, and often you don’t get a lot back.

More often than not, martial arts is about doing the same thing over and over again, and it will be boring for kids, some kids are not up to it, as it is not novelty. Martial arts is not a cool thing to do, and parents should not be watching too much Karate Kid thinking that their kids can be one. Those who romanticizes The Karate Kid movie, they need to watch the first part where the protagonist got beaten up. Get your kids beaten up first, then you’ll see if there is any ounce of martial artist in the child.

Kids do not understand martial arts

They also do not understand that in martial arts, you are expected to get hurt, being hurt and getting injured is part of the hard gritty journey of being a martial artist. If parents send their kids to martial arts school, not expecting them to get hurt, well, then they better find a more staid activity.

In Singapore, the martial arts culture is well, not so ‘martial’. We do not have a strong martial arts identity, and many of us, takes it like it is a part-time, interest group level commitment. That said, not many teachers out there, teaches martial arts for the spirit of the martial arts. While this comments might seem scathing, we need to search deep in our psyche, if we are really attempt to embody martial arts as a way of life, a way of living.

While I have 2 kids, I don’t teach them ‘martial arts’ I teach them fighting, and they need to learn the basic punches, kicks, and take downs, of course the tactical reality of being beaten up, and the ability to beat back. If there is any ‘Budo’ (武道) it will be in the spirit I want them to embody, if they ever gets into a fight, never back down, and be the last person standing, we will talk more about that later.

The true reality is, martial arts for kids in Singapore, is more like another avenue for parents to throw money into kids’ ‘enrichment’ courses, and of course help them get away from their children. It is a perfect excuse/ reasons for parents to bring their children to a martial arts class, for an hour or two, while the parents themselves trot off to have some ‘me’ time. At the end of the day, the children do not learn much martial arts, because they are simply just wearing a gi, prancing and jumping around, with no clue as to why they are doing what they are doing.

Too serious about it

Well, pardon me if this seem too serious; as martial arts is a serious matter to me. I don’t harbour hopes that my children will be able to pick up martial arts like I did, just simply sending them to an Aikido school, or me teaching them Aikido. If they are keen, I will always be there for them to show them the way, if they are not, it is like bringing the proverbial horse to the water, and you know the rest. 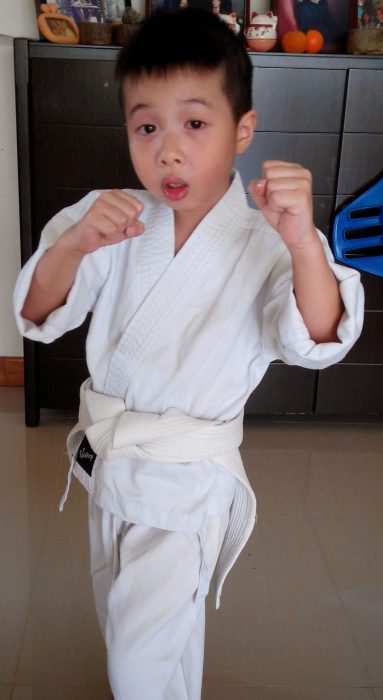 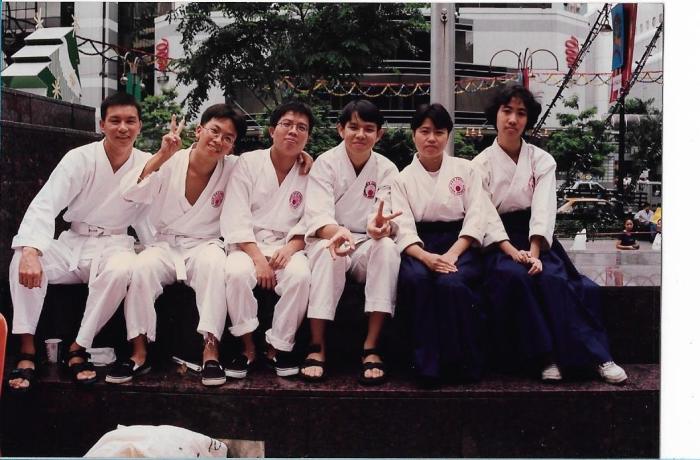 This is the photograph of my first Aikido demonstration. We were lucky we managed to get a group shot.

Guess which one is me? One of them was my elder brother.

Obviously, none of these folks in the photograph practices anymore, except me. This demonstration was done when we were a couple of months(?) into our Aikido and we were tasked to do a demo at Ngee Ann City’s fountain area, I forgot what the event was for, but we did the basic stuffs, like rolls and other things, which I am very sure Tenkan is one of them.

After the demo, we went around giving out some pamphlets, and I vividly remember a guys asking me: “What if someone kicks you?”

At that time my instinctive response was “Block.”

Never would I have guessed that I’d still be in this after all these years.

Your big brother’s Primary School Leaving Examination(PSLE) is over, that means that he will be going over to a new environment, a secondary school.

You will no longer have a big brother in your school.

While we can reminiscence over the ‘good ‘ol days’ a few years from now, the immediate impact is you both will be lonelier in school. But that is life, we all have our own paths to walk.

As your dad, walking you both to school, I will miss the banter as well, some of the nonsense stuffs you both had, while walking to school. Now it will be just me and you. Your brother will have to go to school on his own, he will learn to become a big boy soon.

I will certain miss the crisp morning walking that 8 minutes, holding your hands, and sometimes you both will quarrel a quick quarrel, and I have to explain why and mediate. Bonds are made during times like these and while your big brother no longer walks with you to school, the bond building cannot stop.

As for school, I think you will feel it that somehow, there is no more ‘kor kor’ in school, where you can go to if you need help. Your big brother sometimes finds you during recess so that he can munch a meal with you. you both have each other when your friends decides to be otherwise.

While it had been only 2 years for the both of you to bond as school mates- I hope it has been memorable. School is a whole new ecosystem with its own fun and peril, your big brother paves the way going into your primary school first, then you, he helped you fend off the bigger boys trying to push their weight around you. He has been there for you when you needed help, or company. Now you have to be on your own.

While I have often preached that you can’t count on friends much, in the new school term, you have to learn to socialise more.  Take the new year positively and challenge yourself to be independent, while there is no more kor kor in school, you still have friend’s whom have been with you for the past 2 years, it is time to deepen your relationship with them so that you can have an opportunity to build new bonds.

I hope you don’t feel lonely, and look at 2018 with new stride and a spring in your step. While your big brother moves into a new environment, he has left you in an environment where you can grow and make new friends confidently.