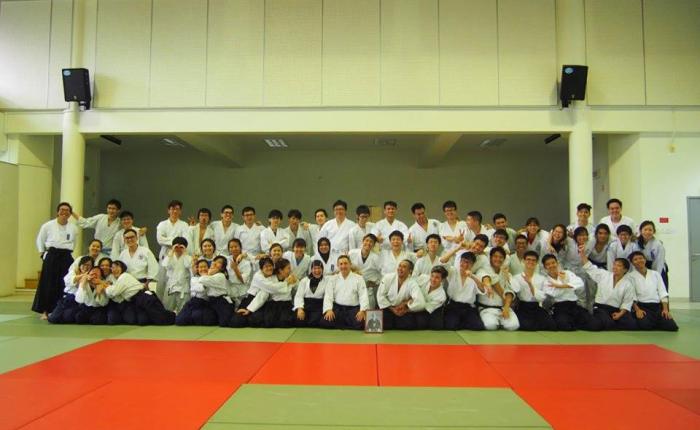 There was an Aikido club exchange between the 4 universities recently, and I had the opportunity to attend all but one of the session. Each of the Aikido club are managed by different Aikikai affiliated schools, so it’s a good time to get exposed to Aikido under different interpretations by different sensei.

(I didn’t attend the one held at SIM University, so I can only post a group photo of those who went)

The session was conducted by Harry sensei, 6th Dan Aikikai. He went through a range of basic Aikido techniques, focusing on Kokyu Nage, with emphasis on posture, contact, and of course attitude.

Harry sensei wants a sincere attitude in training and for the nage to feel that resistance from the uke, the nage needs to know that the uke is not being difficult, instead the nage needs to understand the difficulty. Through a good attitude, we can learn to face a difficult situation with calm and poise.

Harry sensei did a few Kokyu Nage technique using katate dori grasp. Interestingly, he also wanted us to try a ryo kata dori, Kokyu Nage technique. This is a close in technique, where the uke is in a very strong position. The nage as to understand how to expand and hyper extend the uke, so as to weaken the close proximity, find and opening to disrupt the uke, and result in a throw.

This is a habit of Harry sensei, and as a sensei, it is also a time for him to learn. He took many students from other dojos to be his partner for kokyuho. It is sort of a ‘sampling’ he does to get a sense of the students’ ability to understand kokyu ho and how it is done.

Practice, Practice and Practice with a Partner!

I has a very pleasant partner for one of the techniques (I didn’t get her name! Apologies!). I don’t know her grade but having don a hakama, it would have meant that she already as some basic technical knowledge of Aikido. But based on her movement, I should think she might be a junior belt. Bottom line is, she is good enough to better her current grade.

Despite of being junior in belt, and smaller in size, she has a good feel of how the technique ought to work and has a decent amount of finesse. Some junior belts (senior belts as well!) try too hard, and emit too much strength. For her, she has a good balance of attitude, skill, and judgement. That means I can practice very comfortably with her and at a speed which we can understand harmony a bit better. She is able to take a throw well enough and can dish out just about the same. With such a partner, there is no need for much talking to learn. I just need to explain a few minor points and the rest of the learning is through the movement and the technique.

This session which was held on a rainy Saturday, was conducted by Serge sensei, 5th dan Aikikai. He is the head instructor of Mumei Shudan, and his technical explanation of Aikido is second to none.

We went through some basic Aikido warm ups and he also started the class with basic Kokyu Nage technique, and once the class has warmed up sufficiently, we proceed to experiment with more advance technique, such as Sankyo, Kote Gaishi, Shiho Nage. We even have time to squeeze in a multiple attack technique, where the nage’s right hand is held by one uke, and the left hand by another.

The whole idea is to allow the nage to explore how to work with a difficult situation and find the uke who is ‘weaker’, in his ‘politically corrected’ definition, the uke who is in a weaker position, and handle the technique has if you are dealing with one person. You converge the weaker uke towards the other uke, and using one on the other, collectively disrupts both ukes balance, thus escaping their grasps.

I was able to grab the girl whom I was practicing with in NUS earlier and continue to train with her. It doesn’t matter the grade, as long as the partner is able to understand and synchronize with your movement. Such training partners very precious and are hard to come by, and it was indeed my privilege to have her as my training partner.

Once you are able to find that harmony, talking is not only unnecessary , and it also break the physical flow of the technique. And as with my practice with her in NUS, she is able to dish out as much as she can take, which makes it such a joy in training.

It was a rainy Friday evening for SMU last leg of the training. As with NTU dojo, it was my first time there. One great advantage of SMU dojo is the central location, its just a couple of steps away from the MRT and everything is sheltered, great for a stormy weather.

The dojo is helm by Lin Sen Hui sensei, 4th dan Aikikai. He went back to the basics and focus on stance, distance and posture. the analogy he used for the stance is the ‘chopsticks’, leg to the body, if both chopsticks is straight, the posture, spine and head will be properly aligned.

We went through the a series of techniques which also includes Sankyo, where the uke executes a shomen uchi, and the nage has to meet the sword and turn it into a Sankyo. There is also Kote Gaishi, but it was a variation which starts from a katate dori, gyaku hanmi catch.

We managed to learn Irimi Nage from a Shinjukai styled perspective. There was a slight difference in the uke taking the fall, which needs us to adjust our posture a little.

It was a good exposure for me learning from different sensei,as well as exposing myself to a larger group of training partners. There are certainly some variety of understanding and interpretations of how Aikido works, and the challenge for me it not to bring what I learned into other people’s dojo.

More importantly, I challenge myself to adapt and melt into other school’s Aikido techniques. Keep my critical mouth shut, and open myself to a different exposure. It is not about ‘that’s not how we do it’, rather it is about ‘so that’s how you guys do it.’ finding similarities through differences in the techniques, learn to pick up the subtle nuances and change our style accordingly. It is about being an Aikido chameleon, changing our styles so that we can suit whatever style other dojos might have.

It was a  great training session, and I am humbled by the generosity and warmth offered my friends from the other university Aikido clubs.