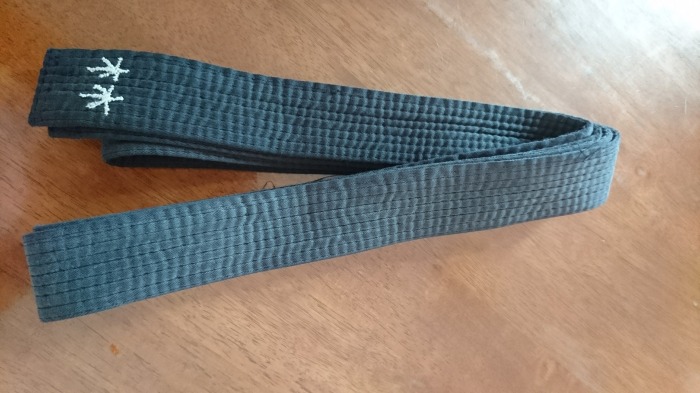 I got my black belt status like everybody else, when I got my 2nd Kyu, that allows me to wear a black belt, but not a hakama, which will be one more grade away.

It was a bummer because I was wearing a Brown (obviously!); and I was young, who could see the need to spend money getting a black belt. In the spirit of being ‘eco-friendly’ ( truth is, I was quite poor then), I wanted to dye the brown belt black, and bought some colour dyes, it wasn’t very successful, due to my inexperience. I don’t know how the conversation came about, but I told Steven about it, and we promptly headed down to Liang Seng to get a Black Belt. Steven bought me my Black Belt.

Since it was a gift, I didn’t choose the thickest, most expensive one. I choose an Adidas brand, a thinner, cheaper one. I was thinking that I might get another one a better one, with my name stitched in gold or yellow, maybe sometime later.

There are many black belts worn by people who spend money getting their names and other fancy words stitched to their belts. I took out the Adidas logo and got my wife to hand stitch a simple ‘林’ on it, and because ‘林’ can be read from both sides, it saves us the trouble of hiding the stitches on the wrong side. And because 林 can be read from both sides, one side of it pays homage to the person who got me my belt, Steven Lim, and of course, the other side, is the surname of the owner, moi. Incidentally, Steven shares the same surname as me, and for his generosity, the ‘林’ will stay with my belt.

My belt is purely pragmatic in existence. The hand stitching is not so much to make this belt unique to me, it serves as a form of identification, as I’ve been to hombu dojo, and seen Gis, belts and hakamas placed all over the changing room. Without a name to your person item, someone might mistakenly take yours and that wouldn’t be a very gracious thing to have happen in Hombu. Hence there is a need for identification. Albeit a simple one for me.

I never got to buying another belt, as this one serves me really well. Although it is thinner, and sometimes, it doesn’t hold the hakama up as well as I’d wanted to, there is still no need for me to get another black belt. I rarely wash it, so it still looked almost the same as the day I bought it. The black is a little faded, the strings coming off in places here and there, but it still serves its purpose, hold the gi together, and let me wear my hakama.

Some people out there will put their belt to wash, not for the purpose of cleanliness, they want to age the belt, so that it look old and seasoned. I never see a need for that, and it has never occurred to me to have a belt that looked aged. It is all there for a practical reason, and I’ll wear it until it falls apart, and only then will there be a need to replace it, and that only after I’ve mend it until it cannot be mended.

I think I’ve been wearing this belt for almost ten years now, and I don’t think I’d be replacing it anytime soon. This is a gift to me and I am reminded of the kindness that was shown to me, every time I put it on.