You have been acquainted to the word ‘Bastard”. No thanks to some kid in your school.

Well, this might be something we forget years from now, but it is one of those things that we would like to pen down.

You came home yesterday and asked your mum, “What is the meaning of Bastard?” Your mum, shocked to even hear you mention the word, told you in a reactive rebuke, it is of course, a ‘bad’ word. And she asked you if you’ve used it. And you obviously said ‘no’.

What we learned from you was that someone in school used the ‘B’ word on you during your basketball training, and it was, in your account, perhaps the senior boys, in Primary 4, 5 or 6. who scolded you and added the ‘B’ word.

On top of that, there is this kid who smacked you head with Colin’s from behind. And someone threw a ball at your face. Those rough and tough stuffs you can rough it out, tough it out.

The twist of the story came this morning, when Colin’s mum got a call from school from the teacher to tell her about what happened. Long story short. The teacher mentioned that you used the word ‘bastard’ in school. and Colin also said you did.

To set the records straight, your mum went to the teacher after class and clarified the matter. Not in your defense but to make sure that the facts are set right. You used the word, which you should aptly be punished. But you didn’t bring the word into the class, someone did, and you were caught using it. That doesn’t make you less ‘wrong’ but it matters that the teacher sees the situation from another angle.

So the point is this, Ian, you have to let us know what is going on in school, even if you are punished for some reason, or you did something wrong, please let us know. Because you could have been contextually right in the wrong content and vice versa.

Had we not set the records straight, you would have been branded the boy who brought the ‘bastard’ to school. We do not want such stereotypes on you, not like this.

I promised you guys a visit to the fabled SuperPark since late last year when it first opened November 2018, so we decided to visit it for the March holidays.

First of all, the park has an EXPANSIVE array of activities all in one roof, which is great because we can get to try out many types of sports, all in air-con comforts. And this come at an EXPENSIVE price tag. 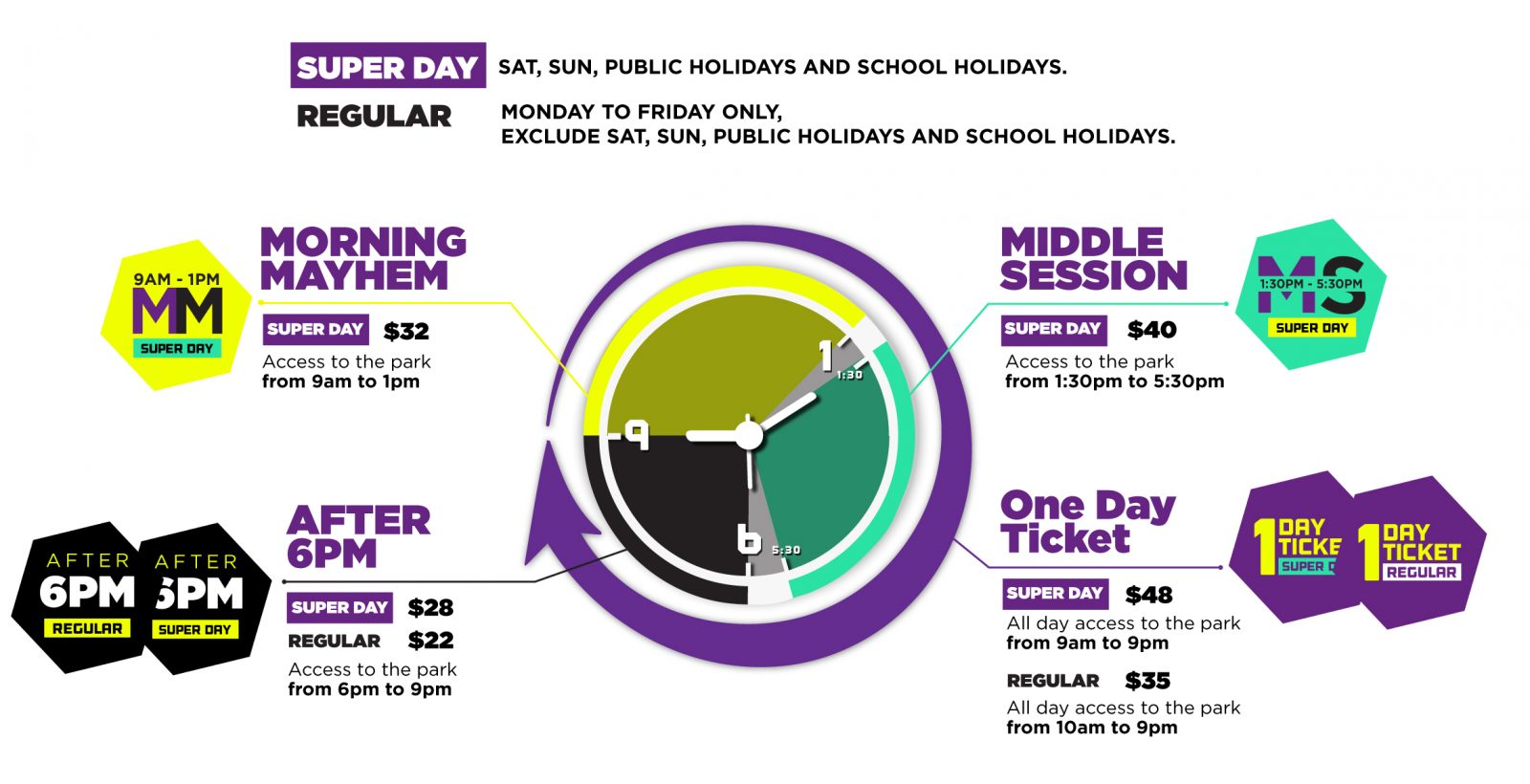 As we could only make it on a Sunday afternoon about 1-nish, we were deciding on the Middle Session which was priced at S$40 or should we go for a S$48 still, despite of only being able to enjoy the later half of the day. Your mother, the better economist, argued that the One Day Ticket is still a better deal, because if we were to purchase the Middle Session Tickets; we have to exit the park by 5.30pm , and for another S$8 more, we can use all the way to 9pm, park closure.

That comes up to $195 in total for the 4 of us, inclusive of a Grip socks for Wayne.

Yeah talking about the Grip Socks, Super Park only allows a specific type of grip socks.

Both Grip sock was from a Tramopline park we went to before and we got these socks, Wayne’s sock was the one on the left, and this wasn’t allowed, perhaps the grip surface wasn’t big enough. So we have to get one pair for Wayne, that’s S$3.

Then off we go!

We were thankful for your mum’s foresight. We played from 2pm all the way to closure, and it was worth the S$48, in a specific way, as we really make sure we played all the stuff within Superpark. And there was more than enough time for us to go through everything twice or 3 times over.

And the spoiler alert was for us One Day Ticket folks, we get to enjoy a lull, between 5pm to 6pm, as there was a ‘shift change’ for those Middle Session Tickets players leaving at 5.30pm, and those After 6pm crowds coming in only at 6pm.

So if you pay a One Day Ticket and goes in the morning when the park opens at 9am, you’ll enjoy 2 lull time one when the Morning Mayhem crowd leaves at 1pm and the Middle Session Tickets crowds comes in at 1.30pm, and the afternoon lull.

Making a fool of ourselves

Personally I enjoyed SuperPark, as it was a place for me to make a fool of myself, without being self-critical or self-judgmental. I confessed I’m not a good ball guy, but I played basketball, soccer and ‘dodgeball’ just for the sake of having fun. Oh, not forgetting baseball and I managed to hit 2 out of 5 balls. 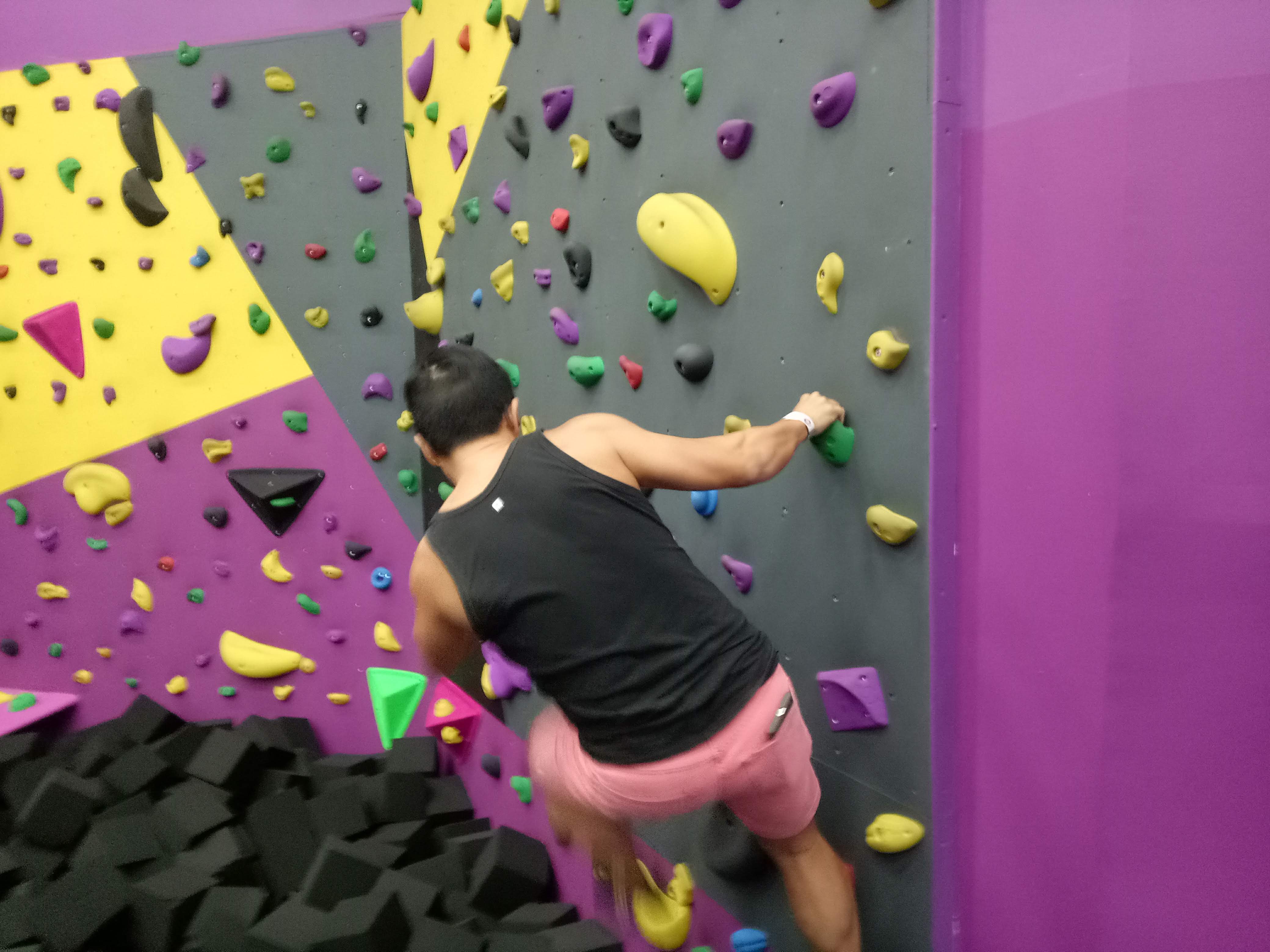 It’s basically a big activity buffet place. There is a skate park where you boys tried skateboarding ( you boys didn’t liked it) then there was skate scootering, which was good fun. You can also try rock wall climbing just round the corner, after you are bored being a skater, and then you can head off to play the slides!

So technically you can have never-ending fun, running crazy all over the place, from balls to carts to slides to more balls, trampolines, rock walls, and more balls.

With activities like these, there is bound to be injuries, as one girl had her nose broken when a baseball hit her. Thankfully nothing major of that sorts happened, but Wayne was hit by the ball a few times on the lips, and it caused some slight bleeding. I was hit in the face by a ball, and thankfully my glasses didn’t break.

But what the heck, if you want to play sports, injuries are bound to happen, just hope it wasn’t a serious one.

Little or no wait

One thing they did right was to time the activities, and most activities have a one-minute timer which the anyone playing must exit when time is up. There was a few times some folks playing ahead of us didn’t activate the timer, and continued to play (of course the system isn’t counting the points, since the timer didn’t start.) but people are usually civil and they realised that and promptly exited after their pressed the timer, and played till their time is up.

The long wait was for the rock wall, at the Super-Climb, this one no choice as it is really up to the climber’s finesse and climbing skills. The walls are relatively easy to climb, but it still takes different people different amount of time to climb it.

Besides, the safety aspect of it cannot be speed up; everyone has to be harnessed well and hooked up properly.

Overall verdict is…Been there, done that.

Your mum and I thought through the whole thing and it was a park that we came, saw, did, and we can move on. While the park was a good mix of activities, each of these individual activities alone isn’t novel to us. We have been to a trampoline park, we have climbed rock walls before, skate scooted, played soccer (downstairs, on the field), basketball at our HDB court. Baseball? Well, yeah, hadn’t done that before. Go-cart? Not really a novelty, since the circuit was a tad too small.

Here in sunny Singapore, we don’t face such cold weather, and whenever we want it, we can take our basketballs out, play to our heart’s content, changed to roller-blades and go skate till the cow come home. If there’s a sport we would like to try out, we can always go to shop at Decathlon for these games and their products are cheap and good.

Call me a stingy Singaporean, pinching every penny, I had to agree with your mum’s
Cost Benefit Analysis, comparing a SuperPark day with an Adventure Cove  day, with an adult tickets costing S$38 and kiddo price at S$30, the latter would have been a better day spent. We would get the sun, sand and sea, as well as the thrills and spills too.