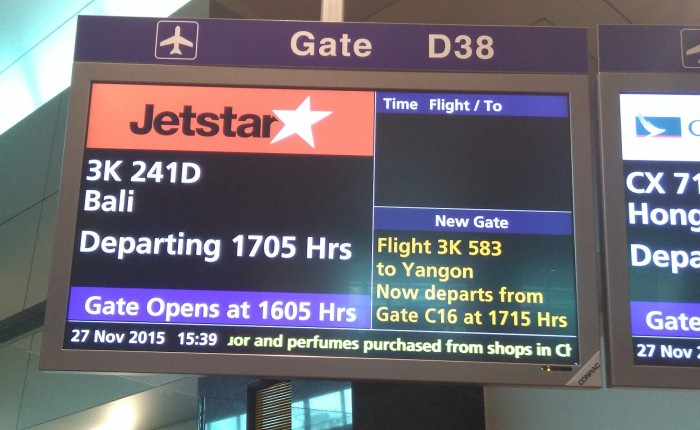 We experiences exactly that when we depart for our Bali trip on 27 November, a warm Friday morning. We booked a cab, we took the first early flight to Bali, Jetstar 3K241, on an Airbus A320, and we were all excited about what lies ahead. The flight will be about 2 hours 40 mins tops, and we settled down with the take off, and other mundane experiences of taking an aeroplane.

Ian, your timing was impeccable when you asked your mother,’what time are we landing?’ To which your mum replied, ‘in just about 30 minutes.’ We’ve been on the air for about 2 hours and looking forward to touching down on Bali about 9 or 10 in the morning, on schedule. Cool.

‘hate to be the bearer of bad news…’

That was when the PA system came on and the captain of the plane told us, he ‘hate to be the bearer of bad news…’ (His exact words!!!) and proceed to professionally deliver it to us, due to the volcano erupting spewing volcanic ash into the atmosphere….(I was still think at this part, ok, our landing will be delayed. Which is fine. Still) … ‘We are unable to land and we will be returning to Singapore’… Yes… returning to Singapore…people in the plane was shocked in disbelief…. Not to mention an air of disappointment. The captain proceed to sum it up… ‘Safety first…’ And that was that. And to add on, the return flight would be another 2 hours…. Of on-air dismay…

It was no fault of anyone actually, it’s just one of those things, unexpected. While we were flying back, I was still half entertaining thoughts that ‘Hey, things might take a turn for the better and we might make another U turn and head for Bali!’ That’s me entertaining wishful thinking, but of course the reality is that, there is only so much fuel the plane hold, and once a decision is made, it is made and will not revert.

The look on your face was utterly disappointment, Wayne, I don’t know about you, Ian, because you were sitting with your mother, but from what I know from her, she said you look just as sian. Well, what to do, we are all encapsulated in an airborne flying tube, with no control over what has just happened, we cannot march into the cockpit and commandeered the plane to land in Bali, the pilot is doing his job for the safety of the entire plane. It is a sense of helplessness, that our plans for the day, or even for the whole holiday might be in jeopardy.

So your mum and I worked out our contingent, claim insurance. If we can take an afternoon flight, we would, we might lost a day, but we can still salvage the rest of the trip, and the highlight, Water Bom.

So the plane made its way back and we sat pondering our fate. The crew was very nice and tried their best to make everyone comfortable. We landed in Singapore, with the cabin crew announcing ‘Welcome to Singapore.’ There were a lot of ‘pfffft…’ And hmph!!!….’ In the air but everyone knew and understood it was not really Jetstar’s fault. It was their company’s policy on safety, and we cannot argue with them on that, better we land back in Singapore, than to have other untoward situations happen elsewhere.

As it was Singapore Changi Airport, we were not short of help. We were told to proceed to Transit counter ‘C’ to check out our alternatives. As we were amongst the last to leave the plane, a queue has already formed at the counter. The Changi Airport staffs wasted no time helping us, by allowing us to help ourselves with their inexhaustive supply of Nescafe Canned coffee, Milo, bottled water, biscuits, Oreos. They helped to allay our inconveniences. The staffs were also very helpful in ‘babysitting’ the both of you while you parents handled the process. It always feels good to be home, even if we were inconvenienced.

We learned that there is another flight out for us, which will depart in 1525hrs, which means we have a little more than 2 hours to kill in the terminal, we were given meal vouchers to settle our lunch at Burger King (honestly we weren’t too starved after gobbling the biscuits and drinks), but want not waste not! We got our meals and had our tummies filled.

We explored the terminals a bit, since this is quite a rare chance for us to have free time, we went to terminal 3 to explore and then took a sky train back, after going to our gate at C11 only to find out that the gate was empty, we panicked and your mum rushed ahead to check what happened, did we missed the flight???!

Turned out we didn’t and the gate was changed to D38, which is at the other side of the terminal. So we rushed there, only to find out the flight was delayed! Until 1705hrs, gates open only at 1605hrs. So we sat and waited again. It sure feels a bit like the Amazing Race! Without the prize money.

So much happening for Day 1! And we have not reached Bali! Eventually, we did, board the plane; the plane took off; the plane flew for the entire journey; and landed in Bali!. This time there was an euphoric cheer in the whole cabin, when they announced “Welcome to Bali!”