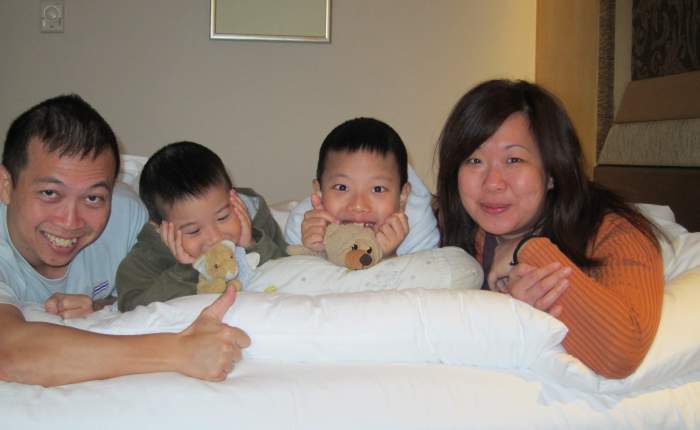 December 14th is a significant date for your parents for it is the day your parents got married. This year is our 10th year together, and indeed is has been quite a 3650 days!

I’ve booked a room with M hotel, the hotel in which we got married back in 2003. The room was a deluxe with a King size bed, I thought it could fit the 4 of us sleeping and it did! Well, we have to snuggle width of the bed.

It was a nice roomy room. And on top of the room, it was packaged with a one way paid trip into Sentosa. I told your mum it will be a “best of both worlds’. One was we can spend time in the hotel where we had our wedding dinner in, the other was Sentosa, where I proposed to your mother.

We ‘booked’ a London cab, since none of you boys has ever taken one. Unfortunately, the hotel wasn’t able to get us one through the phone booking, as all the cabs are taken. Luckily for us, the hotel called back moments later and informed us that there was one London cab just down at the lobby having dropped of a passenger. What luck! We rushed down for the cab and it was an unforgettable ride!

We headed to Palawan beach, for the rope bridge where your dad proposed to your mum. The weather wasn’t in our favour this time as it started pouring which caused us to make a dash across the bridge and headed to one of the 2 towers at the Southernmost Point of Continental Asia.

We soon found out that the rain was a blessing in disguise as it turned out that there was young couple on top of the tower, preparing their proposal! Well, the boyfriend got some friends to help him, and they tied some balloons around the wooden handrails, and the bride-to-be was supposed to pop the balloons to get the message. We chatted up with them and they loved Wayne so much that they get him to bring a balloon to the bride-to-be and pose with her as well.

We didn’t stay to find out the success of that proposal, as we have our own agenda to run, your mum and I, posed at the spot on the bridge, where I put the ring into her finger. It is still as memorable as if it was only yesterday.

We head back to the hotel and you boys had such a splash in the bath tub. We used up all the light sticks I bought and when the lights was turned off, the bath tub emits a funky glow of green, red, blue and yellow. It was such a splash! Well, that has to come to an end when I see your 弟弟 shivering from the cold water!

While you boys were in the bathtub, Shakir, the hotel’s duty manager came up with our Anniversary Cake! It was a delicious Tiramisu cake, made to perfection. It was fluffy, light and sweet. It was so good we polished off the 1 kg cake that night. The 哥哥 who is not a cake lover, predictably couldn’t stomach his share which is to our delight! Your mum and I totally relish the cake.

We went down to the ballroom on the second floor where your parents walked down the isle. There was another couple getting married, doing the very thing we did 10 years ago, so we didn’t wanna crash their party. We took some discreet photos, and it must have look odd, thinking of it now, since we were at the wedding reception area, the parents in bermudas and slippers and the kids in their PJs!

We ended the day with all four of us squeezing into the King size bed and woke up early for another day of fun before we pack up.

Too bad, M hotel is a ‘business hotel’, because the swimming pool is not kid friendly. the shallowest part is 0.9 m and the deepest 2m, too deep for 弟弟to have fun, so we end up hoarding the Jacuzzi, both of them alternating between them.

We ended our day checking out and it was a day of great fun and memories.