I took a short trip to Bandung last week, and there was a couple of firsts for me.

It was my first trip, taking a plane all by myself. yes, you heard it. Your dad’s a big boy now!

It was my first time to Bandung.

It was my first time staying in a Hilton.

It was my first time I had a picture taken with Harry sensei, only. (More on that later)

Our Aikido friends, Kiryokukai Indonesia (KI) invited Harry sensei over for a seminar, which my sensei gladly obliged, more about the seminar in my following post.

Why Bandung is also due to the fact that Bandung is relatively near Singapore, a scant 1.5 hours flight, cost is also affordable. As much as I would like to have an adventure for myself, I cannot break the bank as I have you boys to feed.

I’d gladly take a budget airline, since it was just a short flight, on top of that, I can also keep the cost down. Your mum will have none of that, she insisted on Silkair, as it was operated by Singapore Airlines, I’m travelling alone, and she would want to pay more for my safety.

I love your mum.

The first sign of trouble was the tourist SIM card didn’t work. I had no data, and I panicked. Without data, I am anonymous, it was a scary thought. No one in Bandung speak a decent level of English.

This guy, I don’t know his name obviously,  had a tag ’50’ so I reckoned he is taxi driver number 50. He pestered me, tailed me and I had to get into a cafe, just to break his tail. I got myself a croissant like bread, and sat down for a munch, and just people watch, and also watch ’50’. When I am more settled, I walked out, tapped ’50’ on his shoulder and told him ‘let’s go.’

Well, what can I say about Hilton? N-I-C-E

And it wasn’t too expensive as well. I got a good room on the ninth floor over looking the railway track, watching countless of trains worm their way in and out of the station.

The service is expected, impeccable and I chose the Hilton as Harry sensei and my sempais, James, Nasheer and his wife stays there for the trip as well. So it would be easier to get around if I stayed there with them, at one spot.

My other Aikido friends Edna and Tri stayed at Zest hotel, about 2 km down the street, and Radek stayed at Four Point by the Sheraton. but Hilton was ‘5 bintang’, 5 star in ’50’s opinion.

It was kind of imperative. I need a data, so I asked the concierge about the nearest shop to get a SIM card, he told me a shop down the street, and there is a big shopping mall called Paskal 23, the newest one.

So I trudge out of the hotel to find my precious SIM card.

The traffic in Bandung is typical, horrible.

But I saw it with my Singapore’s eye. It was terrifying. The motorcycle streams in continuum, the cars, buses and people, all uses the same space. The chaos was so evolved, so packed and yet no one gets hurt. Everyone gives in to everyone, in an unrehearsed river of traffic.

The whole environment is so existentialistic. You either move, or get out of the way. So I followed a lady’s stride and move in bold, purposeful steps, It worked to calm myself and as I observed, there is a method in chaos, people still managed to cross the streets, mini buses still stopped, hawkers still managed to sell food, people managed to eat food. Everything didn’t stop to smell Randy’s fear and solace. There is no time for that.

I found the shop selling SIM card and a 6Gb card costs 55,000 rupiah. Not a bad deal, they didn’t check my passport or identity. The SIM card worked as they check it, I pay and got out. I have data!

First thing I did was to texted home, so that your mum knows I am okay. I already did that when I got into the hotel and used the wifi there to update her on my status, now I can be reached on the go, with the SIM card.

While technology frees us, it also chains us to technology.

Despite of all the unfamiliarity, in a foreign land, Bandung is a very safe place. It wasn’t as well lit as Singapore, nor the foot path as well maintained, people still goes on with their business and while I was paranoid about getting mugged at every given corner, what I observed was a level safety for girls to walk the streets, eyes glues to the phone. Kids playing and everyone going about their business. Sure I bumped into a couple of teen gangs, but which country doesn’t have that? Even Singapore have our fair share of Ah Bengs and gangs.

One way I gauge the safety in town was the type of gates shops uses, which is a typical roller shutter gates, which can be easily broken into. In fact, shops in Penang were more fortified with heavy duty reinforced locks that firmly secure the shutters to the ground. When we are in our vehicles, there was no ‘mandate’ to lock the doors. Pedestrians were everywhere.

Oh, most toilets I went to, were clean and smell free.

With data, I managed to hook up with James and our Bandung Host, Ketut sensei has decided to pick all of us up for a trip uphill for dinner.

The traffic was typical still, bad, but it got less congested as we head up to Aviator Coffee Camp for the cool weather and great food.

The weather for that night was a nice chilly 19 degrees, and we all got together to eat. Vincent sensei joined us later for dinner and we had a good time with the hearty food and of course the fantastic weather. Thankfully, your dad can still take that chill with a tee shirt and shorts, and colder, I would have been frozen.

Saturday was training day, so we took a quick but sumptuous meal for breakfast, complements of James. The Hilton breakfast spread is nothing less than the best. It was a good breakfast worthy of a 5 star lodge.

The flight back to Singapore was 10.10am, so I hadn’t have much time to do much, but I wanted to trudge the streets of Bandung one last time, and also enjoy the cool 19 degrees morning.

Right outside the hotel gates, I caught a picture of this lady balancing 2 bags of crackers on a pole to sell. It was a good sign to head out and just enjoy Bandung on foot.

The streets, as I understood on my day 3, is really a shared space between joggers, pedestrians, motorbikers, cars, cyclists, horse drawn carts, tricycles and all sorts of other things.

There is a certain kind of peace in the buzz. Of course there are ‘inconsiderate’ motorists who wouldn’t stop for walkers, but everyone just make do. No one was honking excessively, although there was honking now and then, it is what it is, everyone using a share space, and giving everyone a space. No one was hoarding ‘my right of way’, and insisting that because their cars are bigger, others have to give way. It was quite an amazingly alive spectacle and you can get drawn into watching traffic whole day.

Of course as a tourist, I can afford to sit back and enjoy the methodical melee, I’m sure the local Bandung folks can get quite impatient and irritated with the jams, delays. It was a hard place to be punctual, for sure. 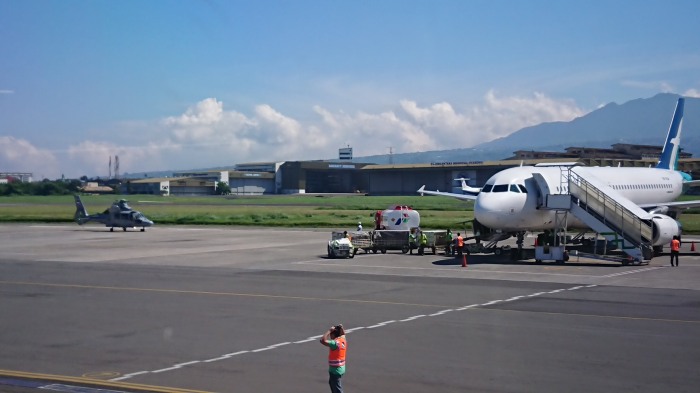 It was a no frills affair, Vincent Sensei wanted to send us off, but i opted for a Grab, so that I can give the rest a bit more space for luggage. Anyway a Grab is just…12,000 rupiah.

The traffic was light for a Sunday 8am, and I tipped the Grab driver and that certainly made his day.

Flying off was a wait and while we waited we witnessed an Indonesian Air force Airbus AS365 Dauphin brought a military big shot to the airport. The drill is the same with all military in the world, the lower ranking officers will lined up and salute the big shot and then they will all walked to where they need to go. And of course, there will always be, a photographer.

The flight was a non event and I got back home safe, back to being a dad.

One thing for sure, Bandung is a place I will sure bring you boys and your mum for a trip. There is still so much more to explore!

theaikidad Aikido, Parenting and everything in between.
Published April 30, 2018