As parents we are constantly bombarded with opinions and lessons, from other parents, our own parents, and of course, everyday experts. One of them is the issue of carry our babies, how much, how often, when and other minute minute details, the argument is not unlike that of car enthusiast on oil change, when, what oil? At what mileage?

Some say, it is not so good to constantly carry the baby, and it will make the baby clingy and dependent on the parents for whatever their needs and wants. when the baby is crying, there are school of thoughts arguing against picking them up for a 抱抱. There are ‘experts’ out there saying that doing so reinforces the cycle of ‘cry, gets 抱抱.’

Others also say that when the baby is in distress, they need 抱抱 as a source of security and comfort. Well, the arguments on such issues are like which one is better? Day or night?

We heard them all, and when Ian was born, in 2009, the internet hadn’t really taken off in a big way, there were no Facebook, yet (these were the days!). So like all parents we listen to these opinions and unlike most parents, we decided to put critical thinking to the issue, and decided to 抱.

And 抱 as much and as often as we possibly can and allow. Which turns out to be quite frequent, a decision we look back, and say, it was the right one.

Baby harness was such a wonderful invention to parents, we have a Baby Bjorn carrier, we got off a Japanese parents, having a garage sale, leaving Singapore for good. We were new parents and we didn’t really know how to use that? Me, falling back to my SAF days, I simply look at it as another LBE (Load Bearing Equipment, ala SBO), another webbing soldiers used on them to put their magazines, water bottles, grenades and stuffs. This one for parents, put baby.

The harness did one thing more important than the rest, it allows a very close parent/baby bonding. There is nothing in this world that can replace a human touch, especially when a parent touches the baby. A harness allows that and more, when we move, the baby can pick up our movement and learn. When the baby is asleep, the parent is able to provide a certain Dunlop pillow effect, size and cushioning is depended on wearer. The gist of it, is it gives a human to human touch and transition, the baby in the harness is learning everything humanly possibly about being a big human, from an angle of touch, proximity and from the single source of comfort and security.

Oh, let’s not forget that baby smell! That sweet concoction of baby power, soft baby skin, a dash of moisturizer,  and some baby sweat! This is the luxury for parents, and on an harness, you can catch a whiff of that it is upwind, or simply bend forward and smell that smelly head!

Your mum, loved the sarong, and used it very extensively, especially when Wayne came along. We were predominantly using Baby Bjorn with Ian and with Wayne, sometimes, but Wayne’s bonding with the mother develop very much with the use of the sarong.

The Sarong we have was an evolved one, with 2 ‘O’ rings stitched to it, specifically for the use of carrying babies. The traditional ones used is just a long roll of cloth, wrapped around the adult, then for the cavity created, you just insert baby.

The Sarong, in your mum’s opinion, was better, as it followed the body’s movement in a much more natural manner, being just cloth, the fabric moves with the ebb and flow of our body. For the customer (baby), Wayne loved it as it is a much more cozier place to be in, compared to Baby Bjorn, which could only carry him upright.

In the Sarong, we can carry Wayne upright, sideways; when he was smaller, he could snuggle up into the Sarong like a cocoon, so there was warmth, comfort and soft light. He can sneak into the Sarong and forget about the world.

Unfortunately, the Sarong, being more of an evolved material, not entirely Bjorn (pun intended) out of design and thought, was at times, difficult to spread the weight properly, and this resulted in fatigue, and poor posture. Nonetheless, it was still preferred by our customer, and the advantages of using it far outweighs the shortcomings.

We wanted to carry out babies. And we want to do that for as long as possible, as often as possible and as much as possible. We are not really in the ‘don’t 抱 camp’. To me that is pure BS, my logic being that, the window to carry our child will eventually ends towards 18 months, or sooner. By and large, we will no longer be able to snuggle, cuddle our charges when they starts to run and prance around, they will no longer stay coy in your embrace. They want to explore, run and hide from you, and when that time comes, it will be too late to get them for a good 抱抱. The best time to do so is when the baby are still weak, vulnerable, unable to walk, and are so dependent on us, as their carriers, ha ha.

Looking back, there is no regrets. Those years spent, cuddling you boys, hugging, snuggling has built a bond between us that is rightfully Dad/ Sons, or Mum/ Sons. More importantly,  it teaches you it is okay, to have touch. As there is touch between us, we impress upon the both of you not to be shy with your own physicality, you’re both comfortable with intimacy. That helps you both understand your own personal space and decide the distance between people.

For those rare moments, we are right, with the both of you at this age, we are no longer able to harness you in a sarong (obviously!), and we don’t hug and kiss as often as we used to. We have no regrets that we had those moments with you boys, where we hugged and kissed to our hearts content. Right now as you both grow up, we will only have those as memories to cherish. Hugs and kisses nowadays still, happens, but it is no longer the same as when you both were babies. 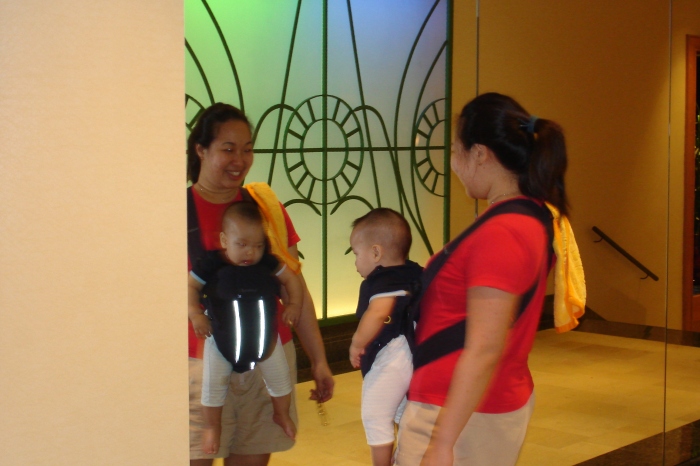