theaikidad in Aikido, Being a Dad, Everything else in between September 18, 2016 592 Words 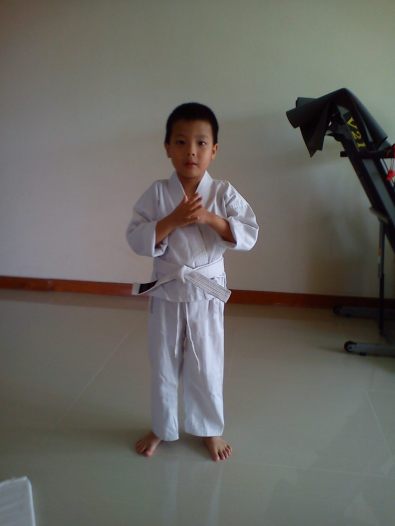 You know your dad is into martial arts, specifically, Aikido. And for any martial arts dad, I naturally would like to impart some of that to you boys. No, I try to resist that. I want to resist putting my opinions on you boys, and instead I would like you guys to develop your own interest. If it happens to be martial arts, then okay, that’s great, if it is not, then that’s okay too.

Yes, I bought a junior kiddo gi for Ian many years back, so much so that you have outgrown it and handed it down to your little brother. It was more of a ‘costume’ thingy than it was a proper martial arts regime.

Life sometimes is a matter of Jekyll and Hyde.

I did try to teach you fundamentals of karate kata, but you didn’t catch on. And now with your little brother coming of age, I think it is time for me try and start something like this again. more on the fighting part, less of the martial arts part.

Martial arts is one thing, but fighting is another thing altogether. I would like to teach you boys how to fight. And I’ve been slowly putting that thought in motion.

At 11 years old, Ian, I think you are robust and mature suffice to reason and keep a focus. You will need to know, with a bit more depth on basic striking, kicking and more importantly, taking punches and kicks and learn to get injured, and fight back.

At your age, learning how to fight properly, is like teaching you how to use a rifle properly, so that you are not tempted to use it out of bravado, but out of an educated, skilled mind. If you need to use your skills to fight, to get out of a fight, in a better condition than your assailant(s), then I have achieved my aim. The Martial Arts part can come later.

Of course, there are simple rules of engagements (ROE), you boys, do not go out there to start a fight, but if you got yourself into one, you get out of it, all means necessary. Sometimes in fighting, you have no time for ethics, you just have to protect yourself and your loved ones, if you have to pummel the belligerent to dust, then do it. If it comes down to you or your attacker(s), I’d rather your attacker(s) grounded and pounded, than you. We can wax lyrical about right and wrong later. But of course, do not start the fight.

And now that your little brother is in the same school as you, he will come to you for help if he gets bullied, and you might need to stand up for him. So you might get into a fight because of him, and I want you to win the fight.

The world is a nice place, I want my boys to be confident in their abilities to see the good in the world, but it is also my duty as your dad to make sure you boys are reality-ready. If things takes a turn for the nasty, you boys can get out of nasty with your own nasty dosage of nasty. We must always be ready to be nice, and the only way to be genuine in our niceties, and pleasantries, is to be fully trained and capable in our ability to be nasty and unpleasant. Life sometimes is a matter of Jekyll and Hyde.