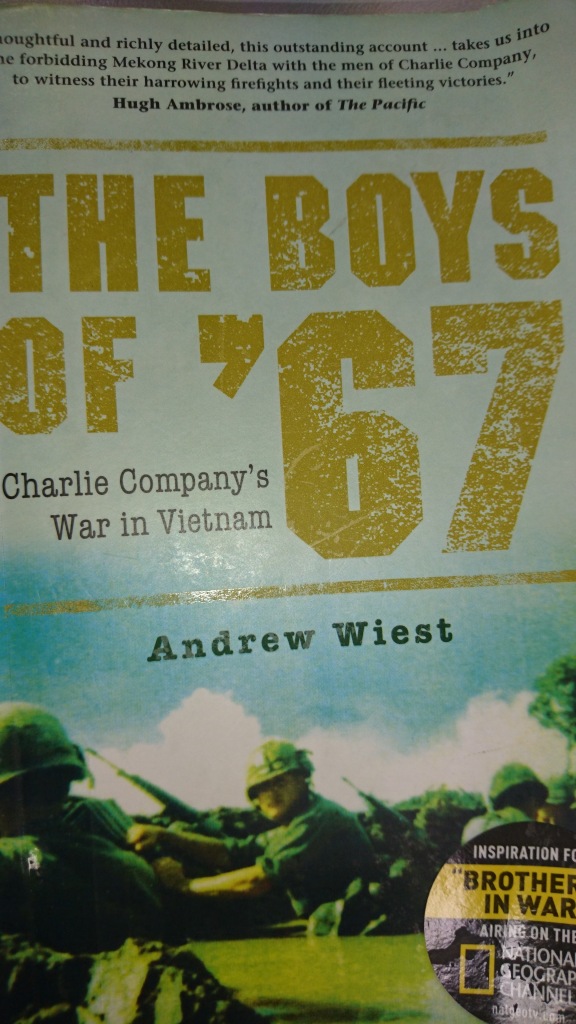 Your dad recently finished a book called The Boys of ’67: Charlie Company’s War in Vietnam by Andrew Wiest. I won’t go into the book in specific but more about what I learned reading it, from the perspective as a dad.

A lot of the men (boys for some!) went to the war in Vietnam as new husbands, dads-to-be and some already dads themselves. The unit, Charlie Company, were a tight groups, as they were recruited from the inception of the unit. Charlie Company didn’t existed prior to the men coming together. Many of them didn’t make it back, those who did, came back maimed, for life.

A lot of these men who died, left behind young wives, and children, some who has never seen their dad. They were born while their dads were in Vietnam, and died in Vietnam. The war they fought in the Mekong Delta was horrible, and in one battle, their sister company Alpha, suffered more than 80% casualty.

When the war ended and the men of Charlie Company came back to America, they were left to pick up the pieces, many couldn’t. Many suffered PTSD, some rose to the occasion and made good their life.

They have seen many horrible things in Vietnam, and watched many of their friends die, many times in their hands. Those who came back were haunted by the memories of fighting for their lives in a war their country wants to forget. Many split and went their ways, trying to get on with lives. They couldn’t.

Eventually, they found solace in each other, in their annual reunion where all the veterans of Charlie Company comes together and talked about their old war stories, catch up with their lives. It is in each other’s company that they find a way out of the nightmare, they all collectively shared. for many of them, it was the only therapy that works.

More importantly, the gathering is also for the next-of-kins for the men who were killed in Vietnam. Many of the dead soldier’s spouse lived in the painful memory of their dead husbands, love was never given a chance to continue, they are left with the sons and daughters who will never see their dads again.

One very spirited solider was an officer by the name of Lt Jack Benedick, he lost both his legs to booby traps but he didn’t lose his spirit. ( He died in March 2013) He went on to become a champion skier and even won medals in Para Olympics. More importantly, what inspired me was this part of the book.

He may have lost his legs, but he didn’t lose his memory of walking. And if he fell, he didn’t forget about getting back up either.

This to me is an awesome attitude. He didn’t blame anyone, he didn’t wallow in self pity, he lost his legs and he gained a lot more. I couldn’t help but think how many of us, able-bodied, but mentally handicapped, and helpless. We allow circumstances and situations get better of us, and allow us to become smaller than our predicament. We didn’t fight.

I ended the book with a lot of thoughts, these men came back from a horrible episodes, trying to be fathers and husbands again, learning to assimilate back to civilian life, and only found peace with the men they fought together in Vietnam. Those dead soldier’s children can only learned about their dad from these men. I can’t help but think, when I die, you boys are fortunate to have spent so much time with me, and know me so well, as your father, and as your mother’s husband. We will become your memories one day and I hope we have ‘downloaded’ enough for the both of you to remember us when we are no longer around.

theaikidad Aikido, Parenting and everything in between.
Published May 2, 2016April 30, 2016