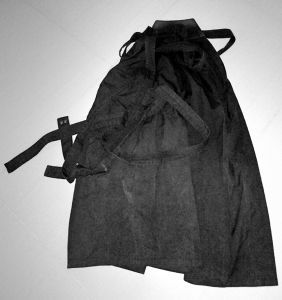 One evening, Harry sensei, at the end of the class, gestured the NUS Chairperson over and passed the students’ grading card to her, and the promptly turned his back and walked off.

We thought nothing of it, until one of the students came to me and told me that Harry sensei didn’t pass his hakama over for the students to fold. Apparently he forgotten to let us fold his hakama.

Without hesitation I put on my shoes and took off for the toilet where Harry sensei will usually change. He was there and was about to unceremoniously chuck his crumpled hakama into his bag. I took it from him, and muttered, ‘You hakama must be folds, cannot don’t fold.’

I brought it back to the mat and quickly fold it so that Harry sensei do not have to wait too long.

He didn’t have to.

While I was waiting for Harry sensei to come out of the toilet, the NUS committee chairperson, vice chair, and the treasurer(I think), was with me, I told them not to forget to fold Harry sensei’s hakama again.

“He can forget that he is our sensei, we cannot forget that we are his students.” that was my parting shot.

At the very baseline, Harry sensei, is after all just another Aikidoka, who happened to be the one conducting the class. He is after all human. He is after all, just a number, a gender, a demographic, a something, someone, anyone. When the class ends, he reverts back to a normal person, no longer taking an Aikido class, no longer Aikido sensei.

But I still considers myself his student, long after I stepped off the mat. And all these years, when he ends his class, someone will fold his hakama, and when no one does, I try to make sure I do it. It really don’t have to be me, it can be any of his students, but someone has to take that initiative. There was about 30-odd number of students and one Harry sensei, but no one folded his hakama, or went after him when he forgot to let us fold.

Its a small thing, perhaps, I’m making a big fuss out of nothing. I’m duty bound to do what is right. Think about how we treat our parents. Sometimes, they might have some kind of mental illness that might rob them of their ability to remember that we are their kids. their memory might fail, but our duty as their children doesn’t. I will always be my parents’ children, whether they remember me or not, even if they disown me, I am still their son. How they treat me, cannot affect how we treat them, because we know who we are, to them and to ourselves.

That’s the fundamental issue I have that evening. Its not about sucking up to Harry sensei, rather, just accord the minimum requirement he asked of us. Folding a hakama is nothing, he could have brought it home and unfold it to wash, and his maid would probably fold it for him, or he would have fold it himself. Fact is, after class, we, the students have to fold it for him, it is a ritual, part of being an Aikidoka. We need to uphold that practice, a small chore that tests us of our discipline.

And it is always the small things that mattered.

theaikidad Aikido, Parenting and everything in between.
Published March 11, 2016

One thought on “Harry Sensei’s Hakama”