If a supply satisfies a demand, then there is a lot of demand for stupid videos like this.

Your mum and I argued about this particular Korean YouTube personality ‘Showry‘ (쇼리 공식 유튜브 채널) who came to prominence in 2015.

Well, as a recent ‘YouTube celebrity’; she does crazy things called ‘eatcasting’, ‘foodporn’ which seems to originates from Korea. Apparently it is a kind of genre where people eat things in all manners and attires (some weird places), in the most outrageous, bizarre and crazy manner, all to get attention and viewership. For Showry, she is quite an attractive woman, so she does her eatcast in skimpy attires, makes a mess out of the food she ‘eats’, pouring all sorts of sauces and creams all over her, and her voluptuous bust. Your mum considers her acts bordering porn. Personally I do consider her regard (or the lack of it) for food, rather disgusting.

Here is where the argument starts.

But she is not.

And in my opinion, she is quite a ‘success’ playing a fool on the internet. And I’m looking at it from a ‘product’ perspective. We can make a couple of assumptions about her, in all due fairness, she is 50/50. Half stupid, half smart. Let’s look at it from ‘half smart’, she has an asset, she is attractive, she has a bust. She she can’t act (at least not Oscar winning type), but she can do stupid things. And she somehow got her formula right.

Frankly, she is not THE most beautiful woman on YouTube, and you can easily find another attractive woman, pour sauce all over herself and make funny noise, can that doppelganger gets as much hits as her? That is the 21.5 million views question. She has that much views as at 5th Jan 2016. She has somehow gotten her act together (pun intended) in such a unique way that she now has such a huge following on YouTube.

I doubt anyone else can do what she does and get the same results, as much as no one can do what Rowan Atkinson does as Mr Bean. Your mum refuse to accept that she has a ‘personality’, but here’s the argument; watching what she does, do occupy a spot in your brain. She does leaves an impression on you, good and/or bad. And that would have made her successful, in a fight for Share of Mind.

But I’m a natural born optimist, and I like to think that she is smarter than that. It do take some smarts and guts to do what she did, and I guess it is not a matter of spontaneity, knowing that she probably need to do many takes, to get it right. There might be many ‘no-good, bloopers’. Well, maybe I’m wrong about that, the things she do could be so downright dumb, even if she gets it wrong, she’ll continue with it anyway!

So the bottom line is this, she is doing what she is doing, fame comes, and of course the money. Will she take the money she earned from doing eatcast, and turn it into something else, some kind of investment? Another business venture maybe? Or will she be so sucked into this fame, she turn to the ‘dark side’ and starts doing really real stupid things to herself. Well, as she is still quite new, we shall be probably talking about her very soon, and over a lot more frequency. 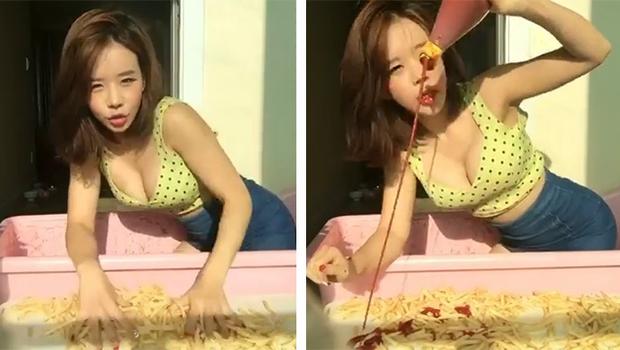 (all pictures sourced from internet)

theaikidad Aikido, Parenting and everything in between.
Published February 6, 2016February 4, 2016